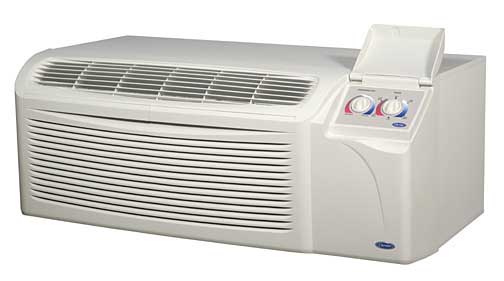 Consumer Contact: Carrier at 800-761-8492 from 8 a.m. to 6 p.m. ET Monday through Friday, or online at www.carrier.com and click on Important Product Safety Recall for more information.
Report an Incident Involving this Product

This recall involves Packaged Terminal Air Conditioners (PTAC) and Packaged Terminal Heat Pumps (PTHP) sold under the Bryant, Carrier and Fast brand names. Recalled units include those with original power cords and those that received a supplemental power cord as part of the 2007 recall. The recalled units have capacities of 7,000; 9,000; 12,000 and 15,000 BTUs and plug into 208/230 volt, 20 amp outlets. The following brands and eight models are being recalled:

Model and serial numbers are located on the ratings/data plate on the right front of the unit, underneath the removable front panel. A complete list of the serial numbers involved in this recall is available by calling Carrier or at www.carrier.com.

Consumers should stop using and unplug the recalled units, and contact Carrier to receive a free replacement cord.